@golmschenk: Free current is the minimum current that the motor will ever draw.
— Manishearth
2

Yes... it's technically possible that the motor would draw less if you were rolling down a hill or something, but @Manishearth nailed it.
— Ian
Sorry, but once Mark updated his answer, it is now the more complete and useful answer to future viewers of the question. Thus I have switched the accepted answer.
— golmschenk
No worries. I focused more on the motor by itself, and I'm glad to see answers that take a more system-centric approach to the question.
— Ian
14

There seems to be trend among less experienced designers to assume that stall current and free current equate to the maximum and minimum currents the motor might encounter.

They are the effective nominal values. You can exceed these limits under relatively common circumstances if you are not careful.

As @Ian and @Mark have noted. The motor can turn into a generator (google "regenerative braking") when an outside source or event causes the motor to move faster than its applied current/voltage. For example, Ian's going down a hill or someone hand cranking the motor.

The current in these situations can not only be less than the free current, but actually go negative (go in the opposite direction -- acts like a source rather than a load).

If you think of it from a work (energy) perspective, say you are pushing a box of clothes down a hallway. It doesn't take much effort to do that, but if your buddy starts pushing with you, however little effort you were expending is lessened. That is the case of a motor going down a slight grade.

A secondary consequence of the generation function of the motor is that once it acquires momentum, it continues to convert that energy into electro-motive force (voltage) once power is no longer applied.

The interesting case is when you are reversing directions. If you rev the motor forward, then immediately switch directions, the voltage on the motor coil is momentarily about twice the previous supply voltage since the motor back-EMF is now in series with the supply. This results, as expected from Ohm's law, in current in excess of stall current.

For these reasons, practical bi-directional motor control circuits include "free-wheeling" diodes (D1-D4) in the figure to provide a return path for the back-emf related currents and thereby clamp the voltage to within the supply rails +/- the forward diode voltage. If you are building your own motor control you should include them as well. 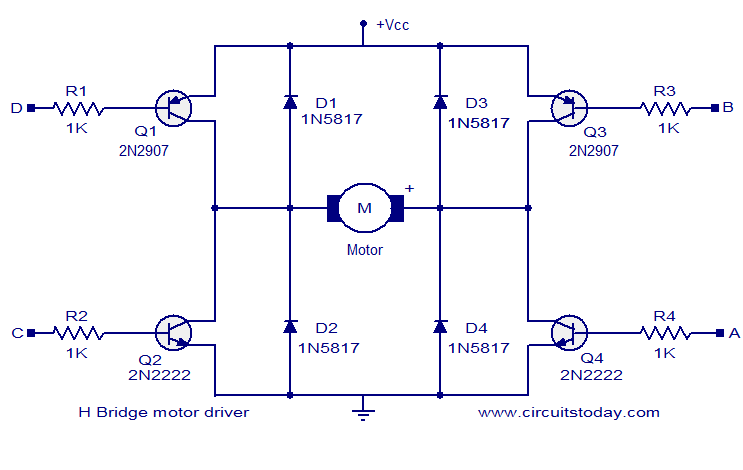 Great answer, I've updated my answer with a few extra notes and a reference to yours for more information. If I get the time I'll look up my notes on the currents you can get in the motor when shorting the phases for emergency breaking. I can't remember enough of that to write it up sensibly at the moment and most of my experience was with brush-less rather than brushed DC motors.
— Mark Booth
4

All very good answers, but as a physics teacher I am concerned about some incorrect equivalences here that can only lead to confusion.

One form of [energy][1], eg [chemical potential energy][2], can be converted into other forms of energy (eg [electric potential energy][3], [kinetic energy][4], [sound energy][5], [thermal energy][6]). In the [SI system][7], which is by far the easiest to understand and most coherent, energy is a scalar physical quantity that is measured in [joules][8]. [Voltage][9] is not the same as energy. Voltage is measured in [volts][10]. One volt is defined as one joule per [coulomb][11]. Hence, energy (measured in joules) can never be converted into volts (measured in joules per coulomb).

The [Electromotive forces][12] (EMFs) in any electromechanical system (of which the electric motor is merely one example) are measured in volts. The [electric currents][13] are measured in [amperes][14]. [Electric charge][15] is measured in coulombs. One coulomb is one ampere second, ie the charge that flows past a point in a current of one ampere for one second.

What one needs to know for any electromechanical system is the [electrical impedance][16] of the electrical part of the system, and the [inertia][17] or [moment of inertia][18] of the mechanical part of the system. One also needs to know the net external [torque][19] driving the complete system at any moment. (When there is no torque per se (because there is no [moment][20]), then one needs to know only the net external [force][21] acting through the [centre of mass][22]).

(NB, initially, I tried to Wikilink each of the twenty-six key concepts in my answer, but the system has informed me that I am not allowed to include more than two links until I have at least ten points.)

— Richard Mahony
소스
Here you go! You can add your links now! P.S. I'm not a physicist, but I can follow your answer. However, I didn't understand how the terms you introduced in the last paragraph relate to "stall current" and "free current", which is the question. It would be helpful if you expanded a bit on that.
— Shahbaz
Welcome to robotics Richard. Thanks for your clarifications. As Shahbaz suggests, you should now be able to edit your answer to add the links back in, and if you could add a basic introduction to reluctance/reactance to help explain your last paragraph, it would make your answer even more useful.
— Mark Booth
당사 사이트를 사용함과 동시에 당사의 쿠키 정책과 개인정보 보호정책을 읽고 이해하였음을 인정하는 것으로 간주합니다.
Licensed under cc by-sa 3.0 with attribution required.